How I earn over $750 a month from my unfinished book

I started to sell the pre-release version of my book in April. Here are the numbers 3 months later.

I am writing a book on web application deployment for quite some time now. It’s called Deployment from Scratch and I decided to sell its unfinished version to early customers. I wanted to finally validate this product with money rather than just the email list I built. I also knew some people wanted to start reading sooner. So why not? My last programming book was also just an ebook in beta afterall.

This post is about some of my thinking behind making the pre-release and how went it went when comes to sales.

While I knew that selling sooner is a good tactic, I wasn’t comfortable to put just about anything out there. I sit down and thought hard what would be the the first public version. In the end, it was actually a small book on its own because it went all the way from networking to deploying static websites. So, if this is a book on just deploying static websites, it would have a good ending. After this release, I was adding a chapter or two from time to time, and notifying my waiting list about the changes.

All of that went on for three months starting in April and it was probably the best decision I made so far for this product. I got new feedback, more validation, and even earn some first dollars. Wondering why I didn’t start sooner? Why I couldn’t go chapter by chapter from the beginning? I was only comfortable selling something once I saw the light at the end. I didn’t want for people to wait too long for the final version.

Most of you came here because of the numbers. So let’s get into it. Here are the sales of the first three months:

Note that views are visits to the Gumroad product page, and sales are before any fees or taxes. The price of the early version was $25, then $29. You can still buy it for this price.

If you are thinking, nice passive income, then you couldn’t be more wrong. I had to spend significant time making updates to the book and announcing them on my mailing list to sell anything. I started to write the book 2 years before that.

But I had progressed in terms of writing, and the sales brought me some sanity and peacefulness. Writing this book is the hardest thing I have ever done. If you bought your copy, a big thank you!

I’ll mention referrer conversions tracked by Gumroad, but I don’t know what to think about them. I link to the landing page from my emails and blog, for example. So those high rates are from people that were already interested one step before arriving at Gumroad page for checkout:

Gumroad can sell your product in their store and it sold 6 copies for $174 with a 10% conversion for me. That’s more than I expected.

Since the most sales come from the mailing list, you might be interested in email campaign statistics. But I’ll have to disappoint you, I value every single person that signs up for the book updates, so I am not tracking them at all. If you value people you are emailing to, stop tracking their private inboxes. Besides, those opens and clicks are never accurate anyway.

But I can tell you that I waited until I had 600 people on the list. Then, since any email sent meant bounces and unsubscribes (usually < 5), I sent other updates only after I got new signups to cover for that.

So that’s it, I am ramen profitable, and most importantly, people like it so far. If you are one of the people giving it a 5-star rating, thank you so so much. That’s why I do it. 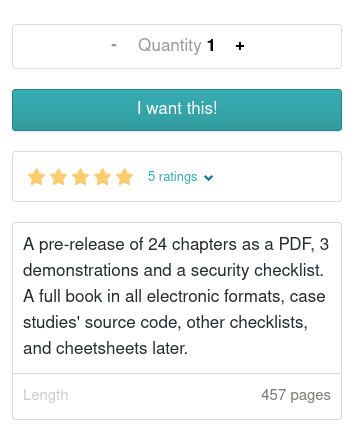 Now excuse me, I have a book to finish…

book marketing
Any comments? Write me a direct message at @strzibnyj.